If you need a reminder of your password, please e-mail [email protected]. 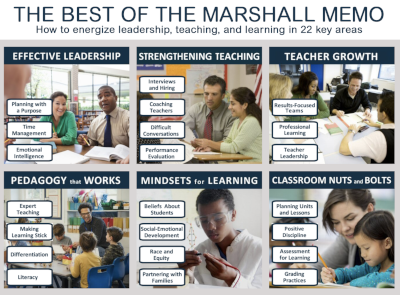 Kim Marshall began his career in 1969 teaching sixth graders in a Boston middle school. He used "learning stations" with some success, wrote curriculum materials for his students, gave workshops for teachers in the Boston area, and began to write articles on classroom and school innovation (click the list of Kim's publications to the left).

During Boston's desegregation crisis in the mid-1970's, Kim became increasingly involved in schoolwide change efforts, read the new research on effective urban schools, and eventually went to graduate school for a year to prepare to become a principal.

But a 1980 Massachusetts tax-cutting referendum closed 27 Boston schools, and Kim found himself in the district's central office, first as a policy advisor and speechwriter for Superintendent Robert Spillane, then leading a team that wrote new K-12 curriculum objectives for the district, and finally serving as director of curriculum and then of planning.

In 1987, Kim finally got his wish and was made a principal. As leader of the Mather Elementary School for the next 15 years, Kim and his colleagues brought about significant improvements in teacher effectiveness, curriculum, assessments, and student achievement. The school also had a gala celebration of its 350th anniversary; the Mather, established in 1639, is the oldest elementary school in the nation.

Since leaving the Mather in 2002, Kim has coached principals (mostly in New York City) and spoken and consulted on teacher supervision and evaluation, time management, curriculum unit design, differentiation, effective use of during-the-year student assessments, and middle-school sex education.

Kim and his wife, Rhoda Schneider, have two children - a daughter teaching humanities in a Boston secondary school and a son teaching high-school history in Philadelphia.